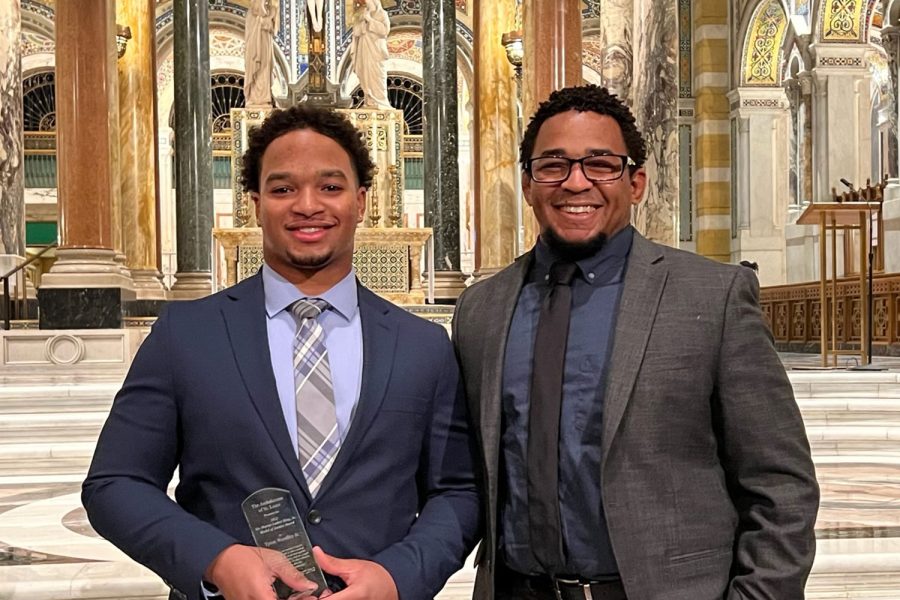 Senior TJ Woodley was one of the 27 students to receive the Dr. Martin Luther King Model of Justice Award on Jan. 16 and has shown his fellow classmates and teachers what it means to be a leader who inspires change.

“I was surprised and grateful that I received the award,” Woodley said, “It encouraged me to continue to work hard as a leader and improve my community”.

Woodley has been an active member of the De Smet community, as a football player all four years, and Co-president of the Black Student Union (BSU).

“He is always looking out for his brothers here,” Director of diversity and inclusion Dr. Aedryan Cox said, “He is an example of a guy that I trust our underclassmen to look at and say hey this is somebody that’s doing it right”.

Not only is TJ a leader in the classroom and in the BSU but he makes his presence felt on the field and in the locker room.

“When we were on the JV team as a freshman playing CBC, I kept getting pressure but couldn’t sack the quarterback until TJ came over to me on the sideline and encouraged me to keep pushing and I made the play thanks to his leadership,” senior Lewis Worthy said. “He proved even as a freshman he could give me great advice and after that, we have grown a really strong bond that I’m proud of”.

TJ has shown immense growth in his time at De Smet, but Dr. Cox thinks he will be able to continue growing into college and beyond.

“I got to see where TJ was as a 14-year old kid to where he is as a young man now and the coolest thing to watch in his progression is that he’s always thinking about how he treats the people around him,” Dr. Cox said. “You need to be firm in who you are as an individual, you can see that in his leadership and I think that is going to carry on in his future”.

TJ is still uncertain about where he will attend school next year but wants to take the lessons he has learned and put them to good use.

“I plan to hold myself accountable, be responsible, work hard, and do everything possible to be successful,” Woodley said, “De Smet has done a good job teaching me those values that will help me succeed and I am ready for whatever the future holds”.