How one basketball manager makes all the difference 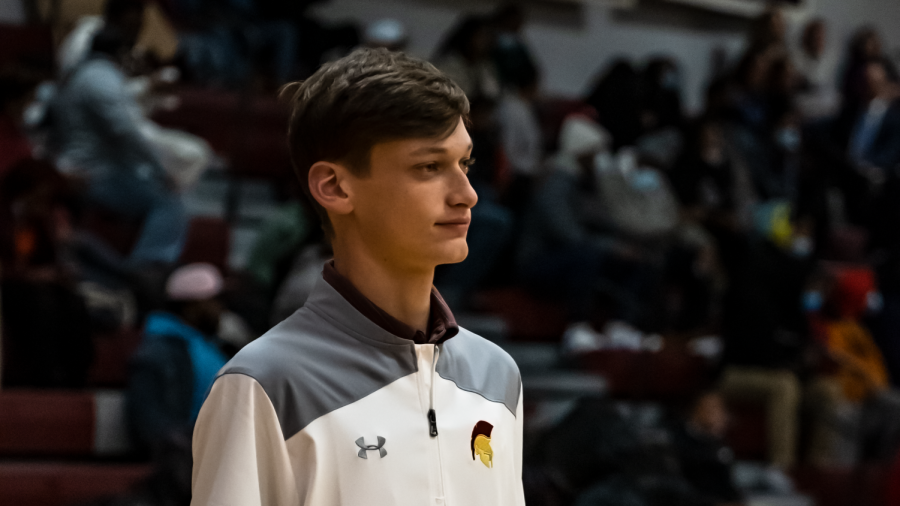 An unsung hero in the program, senior Connor Wade has dedicated his time and presence to the basketball program over his four years at De Smet and does everything he can to help the team without being on the court.

“I have always loved basketball and being a part of a team,” Wade said, “being close to the team and helping them without actually playing has been my favorite experience.”

While Connor might not get acknowledgement for his commitment from the fans or community, the team and head coach Kent Williams understand the crucial role he plays in the program.

“He’s the one manager who is consistently at every practice,” senior forward Jake Bookout said, “He’s great to have around, and he’s completely invested which makes him a great manager and he’s just an all-around great guy.”

Connor’s duties include rebounding shots, running the scores clock at practice, filming games, keeping stats at games, and even leading the other managers and showing them how to perform their duties, but his presence in the locker room has been really impressive to the players.

“Connor is always an encouraging presence when he comes in the locker room,” Bookout said, “He’s always there to pick us up when we are having a bad game or practice and is an important figure for the locker room and the team.”

Connor has grown in his relationships with the players and coaches throughout his team in the program.

“We just sit down and have good talks,” Coach Williams said, “I love coaching so I can get to know my guys and Connor is one of the guys and just as much on the team as anyone else.”

Connor has gained a lot of insight from his time on the team and looks to take what he’s learned after his career as manager.

“I’ve found that there is a lot of ups and downs in the game and the many life lessons basketball has to offer,” Wade said, “I have learned so much about a sport that I love, and I have appreciated getting close to everyone involved in the program and will always remember my time being a part of the team.”