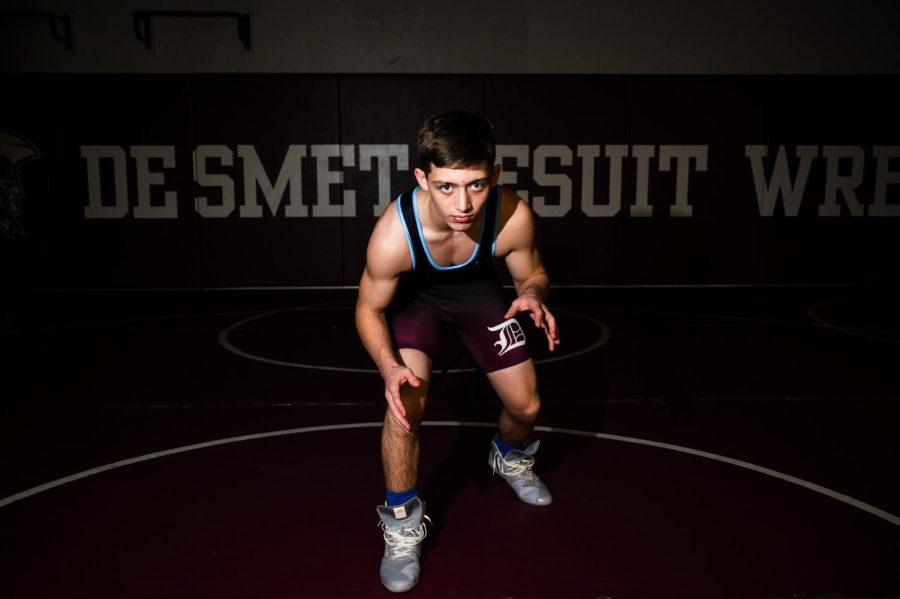 Senior Jesse Hahs hopes to captivate his love for wrestling by ending his high school career with a state championship.

When most kids play sports in grade school they usually play basketball, baseball, soccer, or maybe even flag football, but for Jesse Hahs, he knew early on that his calling was wrestling.

The 132 lb. senior wrestler has been very successful in the program over his four years at De Smet as he now looks to climb the hill and possibly win a state championship, something he has been thinking about for a long time.

“I was 10 years old when I realized my love for wrestling,” Hahs said, “Wrestling is it, this is what I wanna do.”

Hahs placed third in state for his weight class last year and a lot of that has come from his ability to work hard.

“Jesse came in with a lot of experience, but I’ve seen his improvement due to his work effort, his ability to grow, and his ability to learn and execute new techniques as a wrestler,” coach Aedryan Cox said. “Not only is Jesse very successful in doing the right things on the mat, but also doing the right things off the mat as he’s a very talented individual in the classroom.”

A high-level student, Hahs has developed into a leader on the team and in the classroom over his years at De Smet.

“He is a great leader by example,” senior wrestler Toby Moore said. “He pushes us to give it our all, and every time he comes in he gives it a hundred and ten percent.”

Jesse’s has a big impact on a lot of guys on the team by not only pushing them to work hard but also by helping them grow into better wrestlers.

Hahs hopes he can put up a good effort this year but realizes that he has to stay mentally sharp and not worry too much about the results.

“Coming into De Smet I had to learn to be very humble,” Hahs said. “I hope I can place really well this year at stake but, I’ve got to get there first and I really hope I can make it happen.”