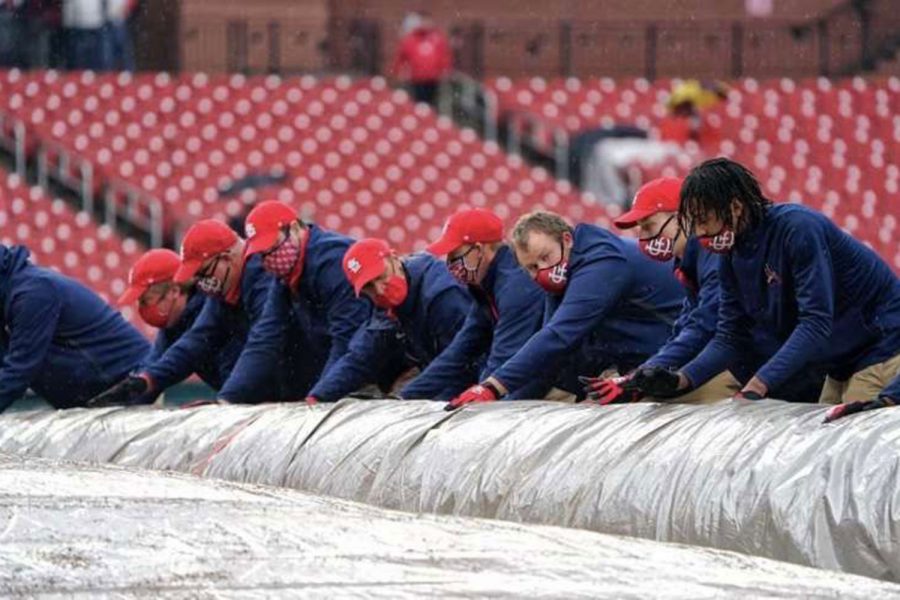 Ethan Weishaar (second from right) helps roll up the tarp after a rain delay at Busch Stadium. The sophomore is the youngest member of the Cardinals grounds crew.

As he ran out onto the field under the night lights in front of thousands of fans he knew that all the hard work it took to get this job was all worth it.

Sophomore Ethan Weishaar is the only high school-age member of the grounds crew for the St. Louis Cardinals. He works with mostly college-age kids.

“I think The repetitiveness of going down to the ballpark almost every day for a week or so at a time is a ton of fun, but at the same time it is important to stay on top of other things that you have to do on a daily basis such as school, sports, and other activities,” Ethan said. “Once you get into the routine of the schedule and the late nights downtown, while also being mindful of other priorities, it makes the experience even more exciting than it already is.”

“I got my foot in the door by talking to people that work with the Cardinals or that have in the past,” Ethan said. “This was very important to do and it made my chances of getting the job a lot higher.”

Ethan’s team does a variety of different jobs to keep the field in tip-top shape before, during, and after the game.

“The job is actually pretty cool. My team is there a couple of hours prior to the game and up to an hour after.” Ethan said. “And during the game, every couple innings we do in-game dragging where we smooth out the infield dirt.”

This type of job takes a lot of time and dedication, making it a task for a high school student like Ethan to balance this and his classes.

“I try to be efficient with my schoolwork as much as I can,” Ethan said. “When I’m in school I focus on school and when I’m at my job I focus on my job.”

Ethan has also had a couple of interactions with a lot of the pitchers such as Daniel Ponce de Leon, Alex Reyes, Giovanny Gallegos, and Genesis Cabrera. In one instance he actually got the chance to hang out in the dugout.

“We are around the players, but really our job is not to be there with them,” Ethan said. “There are times where we interact, but for the most part we’re just doing our job and they’re just doing theirs.”