Sophomore battles through multiple setbacks to succeed on the ice 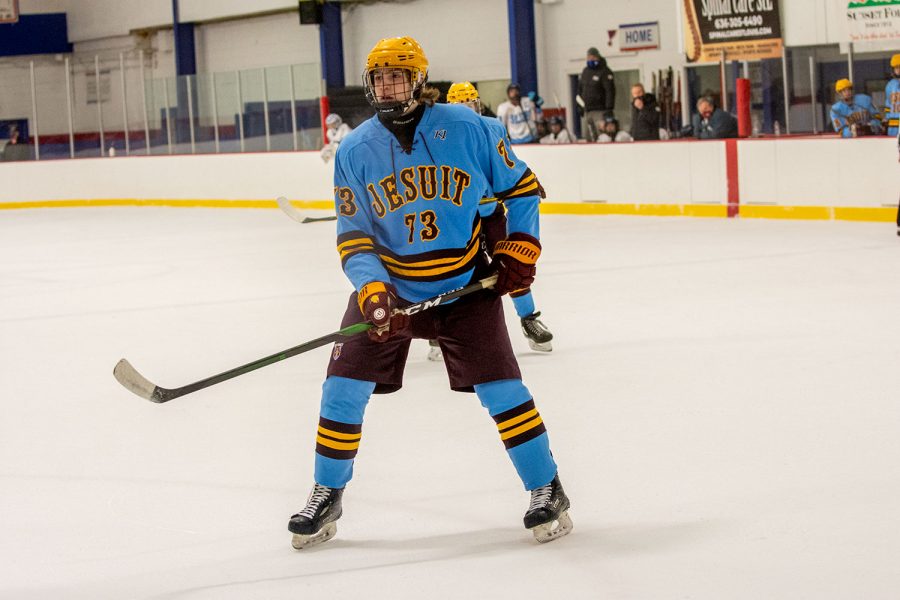 Sophomore Jacob Bosche, wearing #73 in honor of his father, prepares for a faceoff against SLUH Jan. 8. Bosche is playing for the first time in a year after having surgery for Scoliosis.

He was two games into his freshman season when he realized he was struggling to breathe and the pain was unbearable. His back was in excruciating pain. That pain would end his season. He was diagnosed with Scoliosis in his upper back and would need surgery.

But sophomore Jacob Bosche was no stranger to pain. Four years earlier he lost his father to cancer.

“They told him he had one year to live. He fought it for three years and had like three surgeries,” Jacob said. “He pretty much lasted way longer than we expected.”

His father passed away from Synovial Sarcoma in his lung on September 12, 2015. His dad was a member of Missouri Task Force 1 which is a group of first responders. At the time of 9/11 he was a member of Ohio DMAT and was sent to New York to help resolve the situation.

Jacob’s family was supporting him during his time off for his dad. He eventually chose to return to playing, and changed his number to 73, the year his dad was born.

“The stands were completely packed with all my family and friends,” Jacob said. “My dad loved hockey. He never could play because his parents wouldn’t let him.”

“I remember going through the line, and my coach started crying a little bit,” he said. “It was great.”

On November 29, 2019, Jacob had to undergo a four-hour surgery to treat his Scoliosis. The doctors went in and removed all of the discs in his spine, and replaced them with metal rods. He was dozing in and out of consciousness for three days. He was on many pain killers and other medications.

“I can’t remember anything,” he said. “I was just very loopy. My mom told me I was flirting with the nurse.”

Jacob’s full recovery process took around nine months. His teammates and coaches went to visit him in the hospital and at his home. He had to sleep in a hospital bed in his living room for the first three weeks of his recovery. There was a near scare when he fell after walking around his bedroom and tripping over items thrown on the floor in a rush to pack for the hospital.

Jacob had to miss the first game this season due to a broken rib. He was injured during practice after he was hit with a shot by a defenseman.

He finally made his return to the ice on November 30 against Marquette. He didn’t score, but he wore number 73 proudly.

“The kid’s been through a lot,” Varsity Coach Chris Durso said. “Just a really cool kid. I get kind of emotional about these things. What he had to battle back from, one of the best moments was him being in that game last night.”