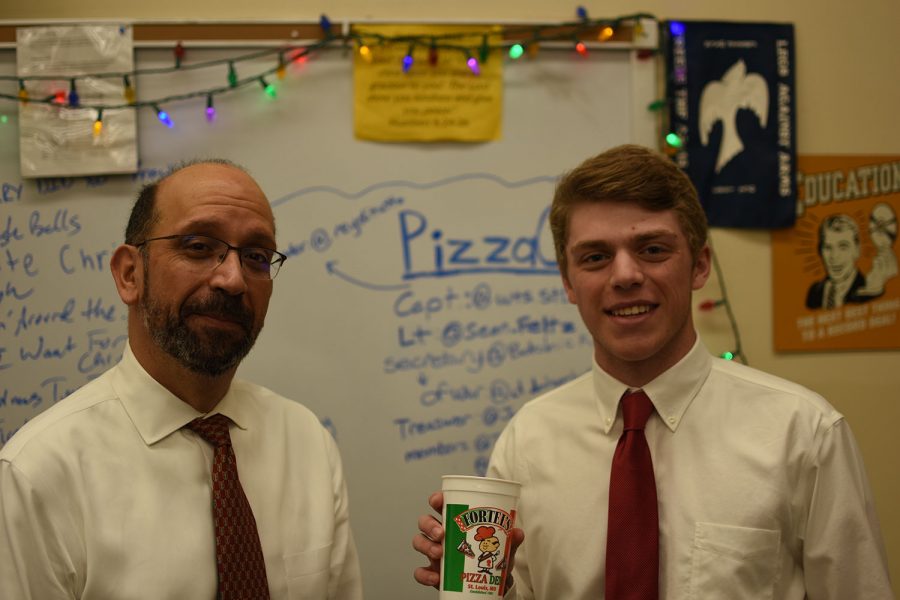 Getting together, meeting new people, and eating some great pizza. That is exactly what happens at the Pizza Club. The club was created by seniors Will Sippel, Tyler Dawson, Brennan Dolnick, and Sean Feltz.

“We were sitting in Mr. Likos’s class and we were talking because we just finished our work and we were craving pizza,” Dolnick said. “We all just sort of thought to ourselves, ‘we should order some pizza for lunch.’”

The idea to make a club out of it did not come first. At first, they were just trying to find a way to eat pizza for lunch.

“It was kind of a loophole in the system,” Dolnick said. “We wanted to order pizza to the school without getting in trouble.”

Making the club took some thought, but it finally came about from Will Sippel.

“We all came up with the idea,” Sippel said. “ I just thought if we were to make a club, it would be a lot easier to actually get the pizza. Because then we have someone who can get the pizza for us and we won’t have to worry about getting the pizza.”

“We had seen people have food delivered by friends to the school and we were like this is fine if we just have a purpose for it,” Sean Feltz said. “I kind of just thought to myself, ‘hey let’s make a club to grow the community and fellowship and the love of pizza,’ which we all ended up agreeing on.”

They all knew that they wanted to make a club and actually be able to eat pizza at school, but there was something that was standing in their way.

“We had everything we needed, except where we can eat it,” Tyler Dawson said. “We all talked about it and we decided on asking Mr. Sherrock.”

They all do agree on the long-term goal is to eat pizza, but they do have other ideas in mind.

“Of course our goal is to eat pizza, but we want to expand it to next year and keep it going on,” Sippel said. “We want to grow our legacies and leave something behind when we are gone.”

As of right now, there are only seniors in the club, but that could change.

“Right now it’s just a senior thing, but we want to expand, but it’s a little difficult because we have senior lunch,” Feltz said. “We’d be open to expanding in the junior class and potentially even bring in the freshman and sophomore class.”

Meetings usually seem to be a good time. They start to find out when to do meetings in a GroupMe they are all in, then they find a date for a meeting, find out how many people are going to the meeting, and then they send out an email to find out what pizza everyone wants. Then they try and decide what new pizza place they haven’t tried yet, then eat the pizza in Sherrocks room during lunch. The senior leaders are very excited to see what this new club can eventually turn into.

“I’m excited to see how many kids we can get in this club, I really think that this can become something big,” Dolnick said. “We kind of touched on a legacy and what we want to leave behind, if we could leave this behind and turn this into something big, that’d be awesome.”