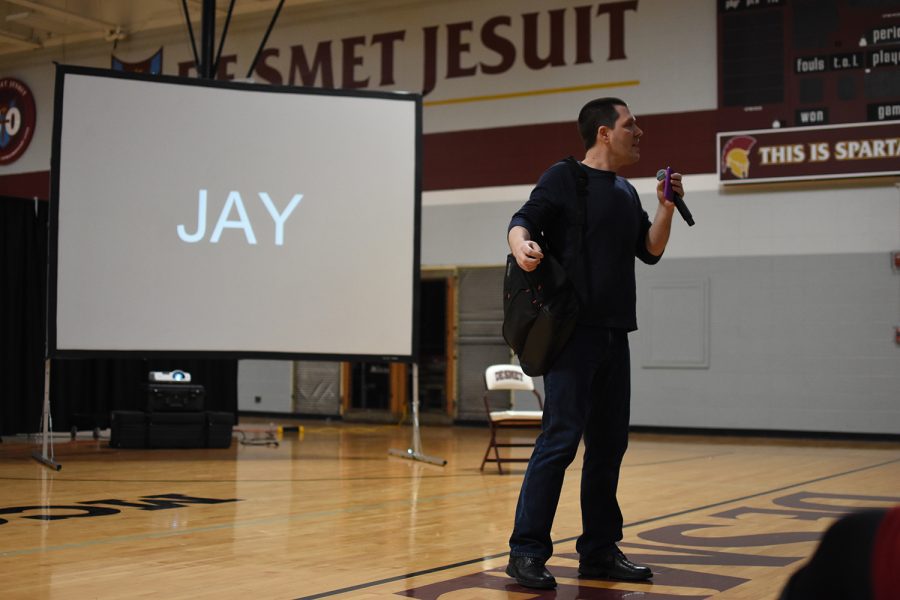 Tim Collins plays the role of a high school student named Jay during his one-man play "The Script" March 23.

With Hollywood being overwhelmed with people being accused of sexual assault, the sexual assault problem is being addressed. Tim Collins performed his one-man show “The Script” March 23 on the effects of sexual assault and how people can intervene and stop it. The assembly was divided into the upperclassmen and the underclassmen.

“I have been touring one-man shows all over the country since college for about 18 years now,” Collins said. “For the last 10 years I was working with kids in jail, and I wanted to write a show that addresses their experience talking about masculinity.”

During the show, Collins played the roles of four high schoolers who have been affected by sexual assault and bullying. Along with teaching about sexual assault, Collin’s performance included the meaning of consent and the importance of it.

“I’ve been to thousands of high schools and the message I always want to deliver is there are bad men and men that make bad decisions, even terrible ones,” Collins said. “But that’s not all men, Men have the opportunity to challenge the language, the assumptions, the attitude, and the media we consume to see if it will affect our sense of masculinity.”

Students not only learned how to act when they witness a sexual assault but also how to treat victims. Not being a “bystander” is a way to help intervene when witnessing sexual assault or bullying.

“I thought the play was done very well, I’ve never seen a one-man show before, but he gave us a bunch of characters that can relate to everyone in the audience,” senior Will Martin said. “I thought the ways we can prevent sexual assault and not be a bystander were helpful. He really gave us insight on that.”

Along with how to react to smaller, more possible forms of toxic masculinity, such as bullying, the performance informs how to react to much larger forms; including rape or sexual assault. Collins also talked about how students can now influence in changing the world.

“There’s an opportunity right now to be able to voice our opinions,” Collins said. “We can challenge rape culture and express ourselves in new and different ways.”