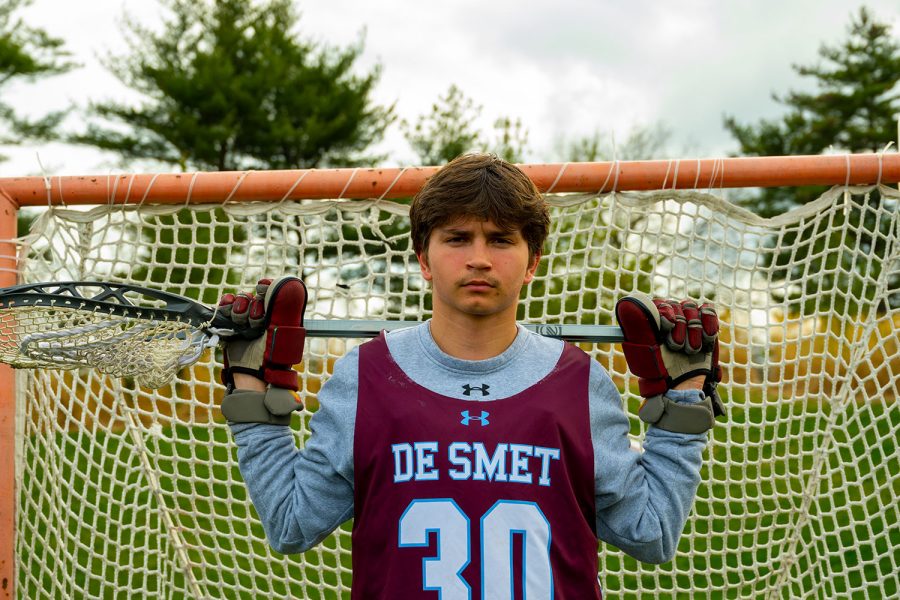 Senior Kyl Granquist is the starting goalie for the lacrosse team, and hopes to end his career with a win.

A Goalie, a captain, and a leader, Kyle Granquist is in his second year as starting goalie for the lacrosse team, which is in the heart of its season and has taken on an advanced role on the team in hopes to win a state title.

“I definitely have a lot more responsibility this year,” Granquist said. “As a veteran on the squad when younger guys have questions it’s my job to have the answers.”

Granquist has been on the varsity team ever since the end of freshman year and his coaches have seen his growth.

“He’s gotten better every year I’ve coached him,” Alumni and goalie coach Ben Besancenez said. “He’s stepped up tremendously this year in being a real leader on the team.”

One of the five captains on the team, Granquist leads the team by example when he steps onto the field.

Granquist attributes his and his team’s success to their ability to work hard.

“We always push each other to go a hundred percent,” Granquist said. “I want to give it my all because it’s my last season and if the whole team does the same we are going to be tough to stop.”

In his first year as a starter, Granquist helped get the team to the state championship. This year he thinks they are united enough to win it all.

“We are all brothers on the team,” Granquist said, “from the oldest senior to the youngest freshman, our bond in the locker room translates on the field.”

Not only is Kyle a leader off the field and in the locker room but his abilities on the field have given him the opportunity to play D1 lacrosse next year at Centre College in Kentucky.

“The goalie is the quarterback of the defense in lacrosse and he’s really embraced that which is why he will keep playing after this year,” Besancenez said. “If he continues to work in the off-season, I think a realistic goal for him could be to play three or four years while he’s there.”

Kyle hopes to see himself end the year with a bang and keep that momentum rolling into his college career.

“To end my De Smet career I want to win a state championship,” Granquist said. “Then after we win state I want to make an impact right when I walk in the doors at Centre and I know I can.”